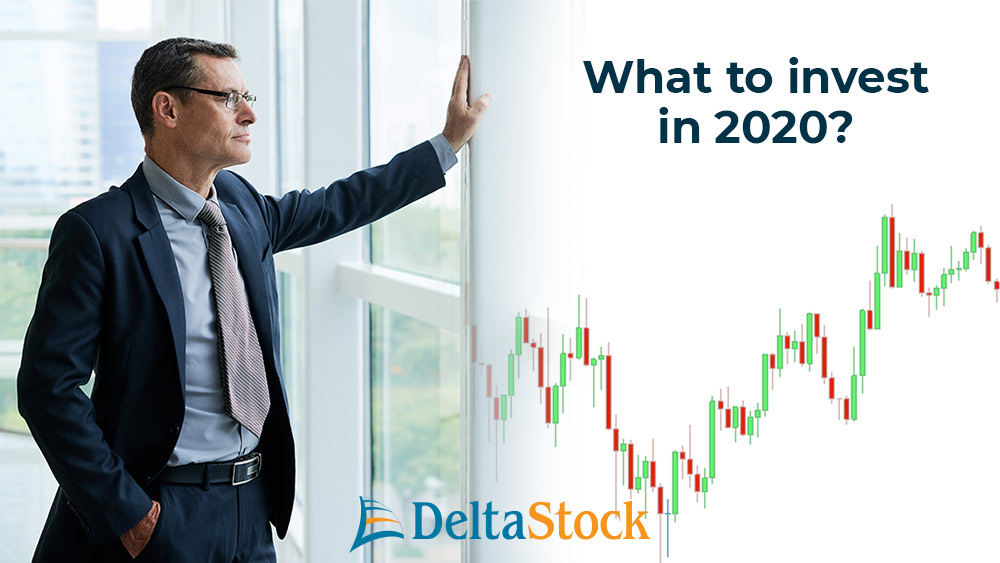 The past 2019 was everything but calm. The markets were shaken by trade wars (mainly between the US and China, but there was also an air of hostility between the US and the EU) and US President Donald Trump’s tweets. Last year also saw growing tensions between the US and Iran, an ongoing drama surrounding Brexit, and concerns about an impending global crisis.

All in all, the current political climate suggests that, in 2020, the financial markets will be significantly affected by geopolitical events and the main themes will be much similar to those of the previous year. According to several analysts, the global economy will continue to grow, albeit at a slower pace. A publication done by Morgan Stanley forecasts a 3.2% growth of the global GDP for 2020 and a 3.5% of that for 2021. The Swiss investment bank UBS, however, expects that, towards the end of this year, the global economy will enter a recession.

Despite the apparent thawing of the trade tensions between the USA and China, it is not entirely certain whether the negotiations between the two countries will have a positive outcome.

There is still uncertainty around Brexit as well. Even though the British PM Boris Johnson secured a solid majority in parliament and announced that the UK is leaving the EU on January 31, the future trade relations between the two parties are far from clear.

The presidential elections in the USA are due in 2020 and this suggests that Donald Trump, who is running for re-election, will be even more unpredictable and unstoppable both at home and on the international scene.

The first harbinger of the upcoming geopolitical tensions was the murder of the Iranian top military commander Qassem Soleimani by a US drone in Baghdad and the following escalation of the tensions between Iran and the USA. The two countries exchanged ferocious threats—Iran promised harsh retaliation and Donald Trump threatened to bomb strategic and cultural sites in the Islamic Republic. The markets reacted anxiously to the news and the oil prices became highly volatile, with further price peaks remaining a strong possibility.

One thing, however, is certain: in 2020, investors will have to deal with uneven recovery, possible high volatility and anxious financial markets. Andrew Sheets, chief strategist at Morgan Stanley, advises investors to be flexible and more cautious as the geopolitical situation could become too unpredictable.

With all that being said, where should one invest in 2020?

Precious metals, like gold and silver, are considered by many to be “safe havens” in times of uncertainty. When the world is threatened by war, high inflation, the markets are insecure, or a recession is looming on the horizon, investors prefer to secure some of their assets by buying gold.

We already see signs of that happening at the start of 2020 when rising tensions between the USA and Iran shot the price of gold upwards. 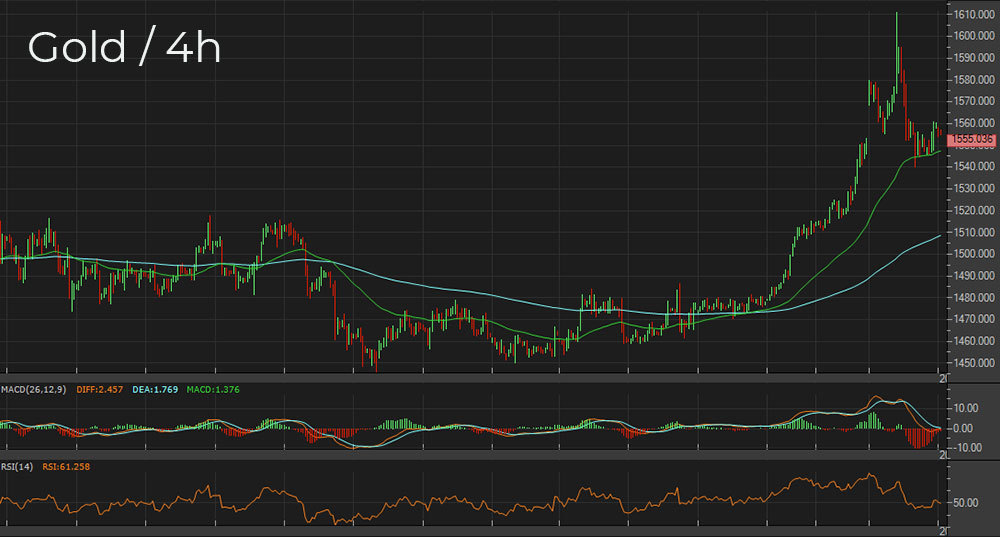 Some gold buyers prefer to purchase the physical asset in the form of investment gold ingots, although this comes with its own set of inconveniences. Storing physical gold, especially in larger quantities, requires a safe storage box and liquidity is not that high, i.e. if you want to sell the gold quickly at a given price, you may not be able to find a buyer at that particular moment.

A suitable alternative to buying gold ingots is trading contracts for difference (CFDs) on the precious metal. These are derivative instruments that allow traders to speculate on the price of gold and provide them with a safety net against high volatility and financial risks, all without actually owning the physical asset. DeltaStock offers this opportunity through two trading platforms—its proprietary Delta Trading platform and the popular MetaTrader 4. The only thing you need to do is register and open a live trading account. And in case you’re not confident in your trading abilities just yet, you could instead open a free demo account with a virtual €10,000 to practice your strategies without risking any real funds.

In 2020, the forex market is poised to remain the largest, most liquid and popular market among traders. There are hundreds of possible combinations of FX pairs to choose from, and the question which of them to invest in remains open. With that being said, here are some suggestions:

EUR/USD is the most popular currency pair and usually has the tightest spread. Additionally, it is not too volatile, making it a suitable choice for beginner traders because it does not involve a lot of risk. The pair represents two of the largest economies in the world—those of the USA and the EU, respectively—and is therefore dependent on their financial performance and the geopolitical climate. According to some analysts, in 2020 the price of the euro vs. the dollar will rise and the common currency will carve out a spot on the list of the best-performing currencies.

GBP/USD is another popular currency pair. It, unlike EUR/USD, is more volatile and this makes it attractive for traders with greater risk appetite. This pair, as well as the other ones containing the GBP, will most likely be of interest to traders worldwide, especially if we take into consideration the upcoming Brexit.

NZD/USD is an exotic currency pair and as such does not rank among the most traded. As a whole, such pairs will be more suited to the needs of more experienced traders who are familiar with the economies of their respective countries. Morgan Stanley’s analysts forecast that the potential stabilising of the global economy and the moderate growth may spark increased demand for exotic currencies like the NZD.

Similarly to gold, which is a preferred investment asset in times of financial turmoil, safe-haven currencies, like the JPY and the CHF, would likely spike investors’ interest if the uncertainty on the global markets escalates.

Company shares continue to be an attractive asset for investors. However, given the sheer abundance of public companies available on the markets, some of them may not be quite able to figure out where to place their money. And while a quick internet search will likely reveal almost as many opinions as there are shares, there are some trends which most consultants seem to agree on.

Rupal Bhansali, chief investment officer and portfolio manager of international and global equity strategies for Ariel Investments, quoted by Reuters, is of the opinion that there are shares that have a bigger growth potential than the so-called FANG shares (Facebook, Apple, Netflix, Google). According to her, considering the never-fading popularity of mobile services, telecoms can be considered providers of staple products and services. Verizon and China Mobile are predicted to offer stable growth in this sector, but their shares are much cheaper than those of a large producer of consumer goods like Procter & Gamble.

We should also not neglect the fact that, in the next few years, 5G technology is expected to grow in popularity. The main beneficiaries here will not only include telecoms, but also the manufacturers of network infrastructure and consumer electronics devices themselves.

Other shares holding great potential are those of companies from the healthcare and biotechnology sectors, such as GlaxoSmithKline and Gilead Sciences. In Bhansali’s words, despite the US regulatory pressure on medication pricing, the companies that develop innovative drugs will continue to thrive.

The popular financial consultancy website The Motley Fool gives an example with Intuitive Surgical—the world’s largest producer of robotically assisted surgical systems and the Da Vinci surgical robots. “The beauty of Intuitive Surgical’s business model is that its margins get better over time,” notes the website. It adds that, in addition to the initial investment of purchasing the surgical system, the expenses for servicing and consumables (blades, etc.) are also significant and those services are offered exclusively by Intuitive Surgical.

Another investment idea of The Motley Fool is the manufacturer of medications for renal cancer treatment—Exelixis, which “swims in cash thanks to the successful drug Cabometyx”. In fact, analysts expect Cabometyx to continue to deliver annual sales growth of close to 10% through 2022. By the end of that year, the company could generate over $2 billion in net cash amounts. That would represent 35% of its current market cap.

Analysts note that the shares of retail companies (both brick-and-mortar and online, such as Amazon and Alibaba) also hold the potential of bringing good returns.

Forbes magazine quotes MasterCard data for the period November 1 – December 24, 2019, showing that online retail sales in the US grew 19% compared to the same period for 2018 and represented 15% of all retail sales.

In 2020, analysts expect even further growth, thanks mainly to US consumers. This suggests that the largest global online retailers—Alibaba and Amazon—will post good results. Just a few days ago, Amazon reported record sales for this past holiday season.

In addition, Amazon is far from being just a retail platform. The company also operates a serious business with an emphasis on cloud services and hosting. This is why The Motley Fool places Amazon at the top of its shares to invest in 2020 list, noting that the company’s cloud services business is far more significant than its retail one.

The analysis of Sean Williams from The Motley Fool shows that, in the first nine months of 2019, the sales of Amazon Web Services (AWS) rose 37.6% compared to the 15.3% sales growth of the online retail and the streaming services. The AWS alone has contributed $6.6 bln to Amazon’s Q3 operating income, compared to $4.1 bln from online retail. This shows that AWS is the more profitable business and has the potential of bringing significant income in the first half of the new decade.

Those are just a few examples of interesting investment options that are present on the financial horizon in 2020. Naturally, analysts’ predictions can always turn out be wrong and you should keep in mind that this publication is not to be treated as investment advice, but rather as a quick overview of upcoming opportunities.

Speaking of investment opportunities—if you are wondering which assets to choose, you can have a look at the full list of instruments offered by DeltaStock: CFDs on more than 1100 different financial assets like forex, shares, silver and gold, indices, futures, ETFs and cryptocurrencies, all of which can be traded through our proprietary trading platform Delta Trading.

If you feel like you need to gain a bit of hands-on experience first, you may instead opt for a free demo account, where you can practice your trading skills without risking your personal funds.